Several times over the past few months the topic of rattlesnake bites has come up with clients. This post will take a closer look at the treatment and management of this emergency.

The Hill Country region of Texas is home to all 4 of the major groups of venomous snakes in North America (rattlesnakes, copperheads, water moccasins and coral snakes). Of these 4 groups, rattlesnakes and copperheads are the most common offenders probably due to their preferred habitat and behavior. Horses being the curious grazing creatures that they are, are usually bitten on the face and multiple bites are possible. Bites to the limbs occur but with much less frequency. The severity of a snake bite can range from mild local inflammation to death. Primarily due to size, and thus dilution of the venom, snakebites are not as commonly fatal in the horse as they are in smaller veterinary species like dogs. Much of the variability in severity can be attributed to the location of the bite wound, the type of snake and therefore toxins in the venom and the amount of venom injected by the snake. Snake venom is complex and unique to the species of snake. The venom of rattlesnakes contains numerous and variable enzymes that result in severe tissue damage at the site of the bite and can have systemic effects both due to the direct toxic effect of the venom and harmful side effects of the bodies response to the tissue damage caused by the bite.

The most common presentation for these cases is a horse with a severely swollen, edematous and painful nose and muzzle that may be breathing loudly. Respiratory rate and effort may be increased with even mild physical exertion due to the narrowing of the nasal passages caused by the swelling. There is usually a serous or serosanguinous nasal discharge (clear or blood tinged) initially that may become mucoid after time passes. Puncture wounds can often be identified, and are usually oozing, although the fang marks may be further apart than expected due to the swelling that occurs following the bite. The swelling is usually very warm to the touch and the horses are resentful to touching it because it, as you might imagine, is quite painful. Remarkably, even with what I regard to be significant discomfort and massive swelling, many will eat or attempt to eat through it all. Although acute cardiovascular effects of snakebites are only occasionally appreciated clinically in the horse, some recent research has indicated that ECG changes and cardiac troponin I (a protein specific for cardiac muscle injury) increases following envenomation are quite common and a risk factor for heart failure later in life. 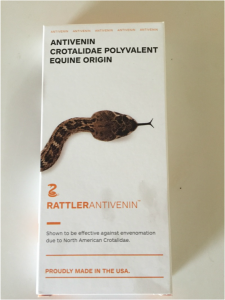 There is only one definitive treatment for venomous snakebites and that is antivenom. Antivenom contains antibodies of equine origin to rattlesnake venom that deactivate the enzymes in the venom thus reducing the venoms potency. It seems that many (not all) of these antibodies are cross protective to the different kinds of North American pit vipers. The earlier antivenom is administered the more helpful it will be. It probably exerts its greatest benefit if given within the first 6-8 hours following a bite but it may still be helpful much further out. It has shown effectiveness in decreasing mortality rates as well as decreasing pain and swelling which in turn decreases the duration and intensity of supportive care required. Additionally, since the toxins in the venom are being neutralized, it is currently hypothesized, though not proven, that there would be fewer chronic cardiac effects. It is currently believed that treatment may not only help the horse feel better sooner, but also help to prolong the athletic career or life of the horse by decreasing the cardiotoxic effects of the snake bite. The Rattler Antivenin product from Mg Biologics is approved for use in horses and none of the horses in the safety and efficacy studies had any reported adverse events associated with the product.

Supportive care measures for snakebites include: 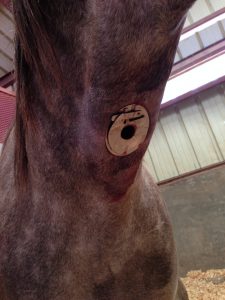 The cost of antivenom therapy has historically been a significant barrier to its implementation. The good news is that it is now actually an affordable option for horses suffering from a snakebite and may significantly reduce the amount and cost of supportive care that follows. If you’ve made it this far—you’re a trooper! If you have questions or concerns about your horse’s (or cow’s or goat’s or sheep’s, you get the idea) health, feel free to give us a call to schedule an appointment. We would love to help any way we can!

Font Resize
Contrast
Accessibility by WAH
Call Us Text Us